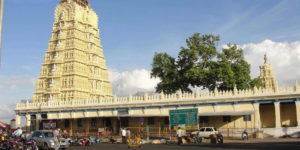 Chamundi Hills can be viewed from a distance of about 8 to 10 kms and from all the corners of Mysore City. Chamundeshwari temple is situated on the top of Chamundi hill which is about 3,489 ft. above sea level and located at a distance of 13 kms. from Mysore. The temple is dedicated to Sri Chamundeshwari, the titular deity of the Mysore Royal Family also described as ‘Mahishasura Mardini’ for having killed the buffalo headed demon Mahishasura. The temple has a very beautiful idol of the goddess wearing a garland of skulls. Goddess Chamundeshwari, also spelled Chamundeswari is an incarnation of Goddess Durga, Goddess Kali is also referred to as the Goddess Chamundi.

Mysore was ruled by the demon-king Mahishasura, he was a buffalo-headed monster. Hence, came the name of this place – Mahishuru, the city of demon Mahisha. Hearing to the prayers of Gods and Goddess to save them from the monster, Goddess Parvathi, (consort of Lord Siva), took birth as Chamundeshwari and killed the monster. After killing the demon, the Goddess resided atop the Chamundi Hills where she is worshiped with reverence and devotion. The goddess is also known as Mahishasura Mardini meaning She who slew Mahishasura.